Alan is 74 and was told he had Parkinson’s 18 months ago. For Alan, the diagnosis meant he could start managing his symptoms and taking back some control. 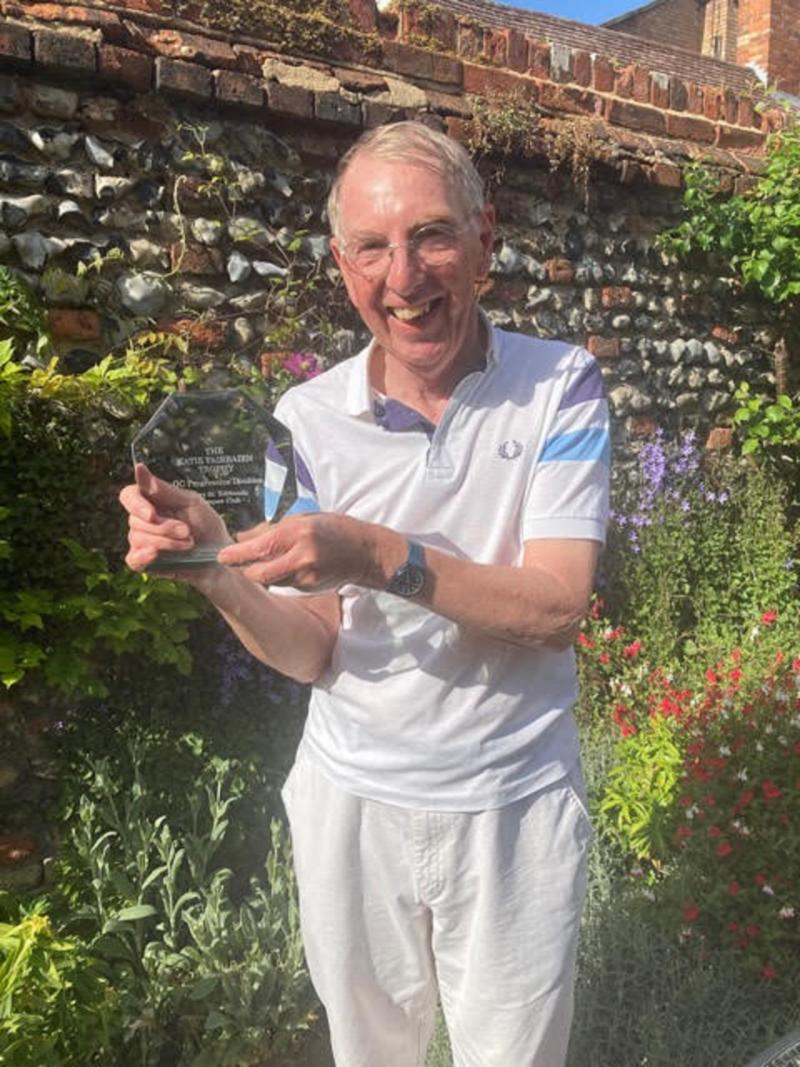 Alan with the trophy he won at his croquet club

After a stroke 4 years ago, Alan started experiencing a range of different symptoms, which he assumed were related to the stroke, “I was stiff, shaking and walking very slowly,” says Alan. “My wife, Judy, said I walked like an old man.”

When a doctor told Alan he had recovered well from his stroke and these symptoms weren’t related, he was referred to a neurologist.

“Before I went into the specialist’s room, he asked me to walk up and down the corridor,” Alan remembers. “Afterwards, he said you can tell a lot from someone’s walk.” Within 20 minutes, Alan was told he had Parkinson’s.

His specialist was optimistic though. “He told me my symptoms were mild and that medication would help. To be honest, it was a relief to hear that.”

When Alan got home, the first thing he did was break the news to Judy. “I told her, ‘Parkinson’s has been confirmed. It’s mild. I’ve got tablets and we will cope with this.” In fact, Alan had already taken his first dose of medication before he’d even left the hospital after collecting his first prescription from the onsite pharmacy.

We were having a new carpet fitted, so my routine was disrupted and I forgot to take a tablet. My hand started shaking so it shows me how well my medication works normally.

Alan had never had to take regular medication before having his stroke, so he has had to learn a new routine. He knows it’s especially important to stick to the regimen for his Parkinson’s medication. “I have to take my tablets at least 30 minutes before a meal, 3 times a day. It took me a while to work out when to take them,” he says.

“Every morning I knew I had to do 3 things when I woke up - feed our cat, make a cup of tea and take a tablet. Then I would leave the other 2 pills for that day in a bowl on the side in the kitchen. I knew that once that bowl was empty, I’d taken all my medication for that day. And that worked - until last Christmas.

“We were having a new carpet fitted, so my routine was disrupted and I forgot to take a tablet. My hand started shaking so it shows me how well my medication works normally.

“After that I ordered myself a digital watch. So now I still put my tablets in a bowl once I’ve taken my morning dose. But I have alarms set on my watch to remind me to take my medication and since I’ve been doing that, I’ve never forgotten a dose. It can be difficult to get into a routine, but I’ve found this watch really helpful.”

In the past, I have exercised, but never with any routine in mind. Now I am active every day.

Another aspect of living with Parkinson’s Alan has adapted to is regular physical activity. “In the past, I have exercised, but never with any routine in mind. Now I am active every day.”

He goes to a weekly local exercise class for people with Parkinson’s and across the week, Alan does a 30-minute daily walk, or an hour’s cycle ride. But his main passion is croquet, which he plays at his local club.

“After my diagnosis, I wasn’t offered any club games, so I asked the captain why. She was worried I wouldn’t be able to manage a whole day’s competition - but then I won the club competition,” Alan smiles.

“For me, Parkinson’s is not obviously a physical thing and the condition hasn’t affected my game at all. I can still play the strokes as I used to,” Alan says. “My club partner didn’t even know I had it.”

It may seem strange for me to say this, but for me, being diagnosed with Parkinson’s is good news. Giving it a name meant everything.

'Giving it a name meant everything'

“They say that with Parkinson's everyone is different and I am so pleased that the small amount of medication I take each day really does make a difference,” Alan says.

“My father had Parkinson’s and had significant symptoms for the last 10 years of his life,” Alan says. “I know things are likely to progress as the years go by. But my consultant, who is marvellous, has assured me there are plenty more weapons he could use in the fight against my condition.

“It may seem strange for me to say this, but for me, being diagnosed with Parkinson’s is good news. Giving it a name meant everything. I could get treatment and get my symptoms under control.

“When I told a friend, who also has Parkinson’s, that I’d been diagnosed, he told me that there are certainly things a lot worse than Parkinson’s,” remembers Alan. “I would advise anyone to see a specialist if they are worried it could be Parkinson’s - it will not be as bad as you think.”

Q&A: the importance of getting Parkinson's medication on time

Read more about 'Q&A: the importance of getting Parkinson's medication on time '
Stories

"On the whole we know we’re lucky" - Steff's story